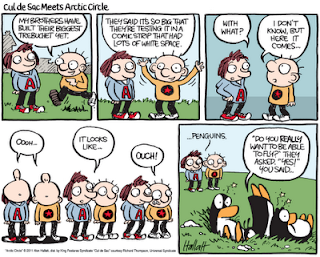 Alex sent us this wonderful strip for the book! I do believe that Alex, from Australia, is so far the winner of the long distance contributer for Team Cul de Sac. Thank you so much! More on Alex!

After a getting a degree in biochemistry and working in the pharmaceutical industry for far too long, Alex Hallatt downshifted from London to the South Coast of England to become a full time cartoonist in 1999. She did the cartoon for Brighton's daily paper for 4 years, before downshifting further to New Zealand.

In 2007, her comic strip about three penguins who migrated to the Arctic (Arctic Circle) was syndicated by King Features. It has an underlying environmental theme and appears in newspapers worldwide. Alex crossed the ditch to Australia in 2008 and now lives in Elwood, Melbourne. 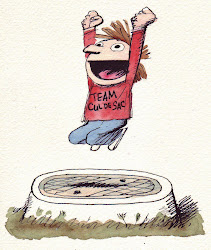